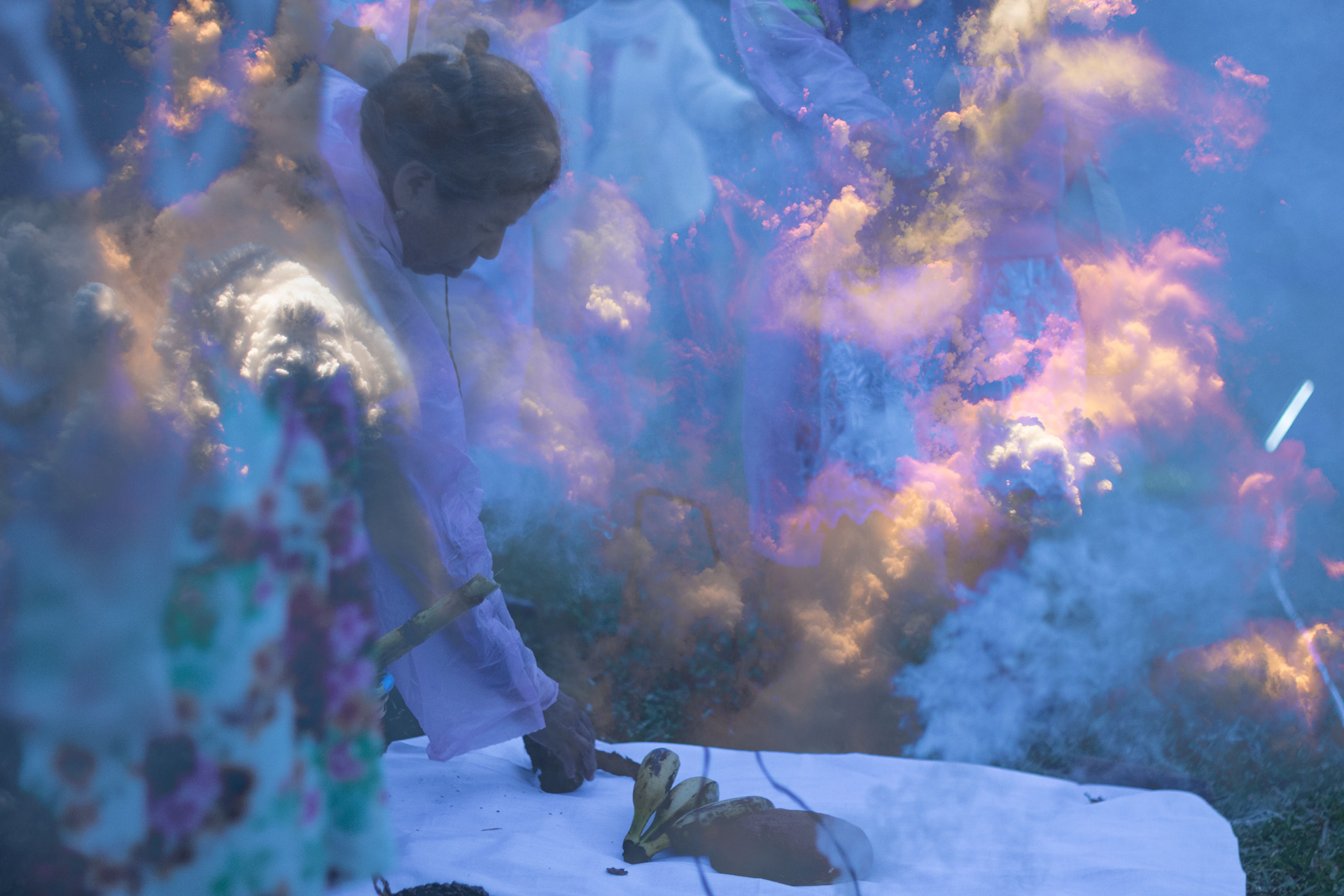 At its height, from 800 to 1200 A.D, El Tajín was one of the most powerful and important cities in Mesoamerica. It was left undisturbed —the first Spanish conquistadors luckily missed it— for over 500 years until being rediscovered again in 1785.

Today, the ‘City of Thunder’ is one of the most important archaeological sites in Mexico, a fine example of pre-Hispanic architecture embedded with a complex cosmovision. It’s not clear who built El Tajín— we can see influences from Teotihuacán, Oaxaca and even the Mayas— but today, the Totonac indigenous people have reappropriated this space as their own spiritual home.

Last March I travelled to El Tajín to spend a few days at the Centro de Artes Indígenas CAI, a unique arts centre awarded by UNESCO as one of the best practices for safeguarding intangible cultural heritage. Here, all year long, several school-houses preserve and teach indigenous ways-of-knowing to the future generations, from traditional healing to pottery, weaving, dancing or the ‘flowery word’, Totonac’s native tongue.

“Reconciling ourselves with the historical situation that we had to live is not easy —tells me Humberto García, CAI’s Director— because there is pain, there is sadness, there is anger, there is joy, there is everything. Learning to forgive, to look forward, that is a titanic challenge.” 2019 marks the 500th anniversary of the arrival of Hernán Cortés, the Spanish Conquistador, to Mexico. It was no coincidence that during my stay at CAI, Mexico’s president, Andrés Manuel López Obrador, publicly asked Spain and the Pope for some overdue conquest apologies.

While words like brutality and abuse are still avoided in Spanish history textbooks, Humberto referred to his own experience: “Kids here used to be told to be ashamed to be Totonac. It was coming from our own academic institutions. In the 50s, 60s and 70s, throughout all Mexico, indigenous nations were beaten up, defragmented; our own governance and political authorities were destroyed. Even our rituals were satanized. We had to start with what was left, and from there, regenerate our own culture. We didn’t know what path to follow, but we knew that regeneration was necessary.” 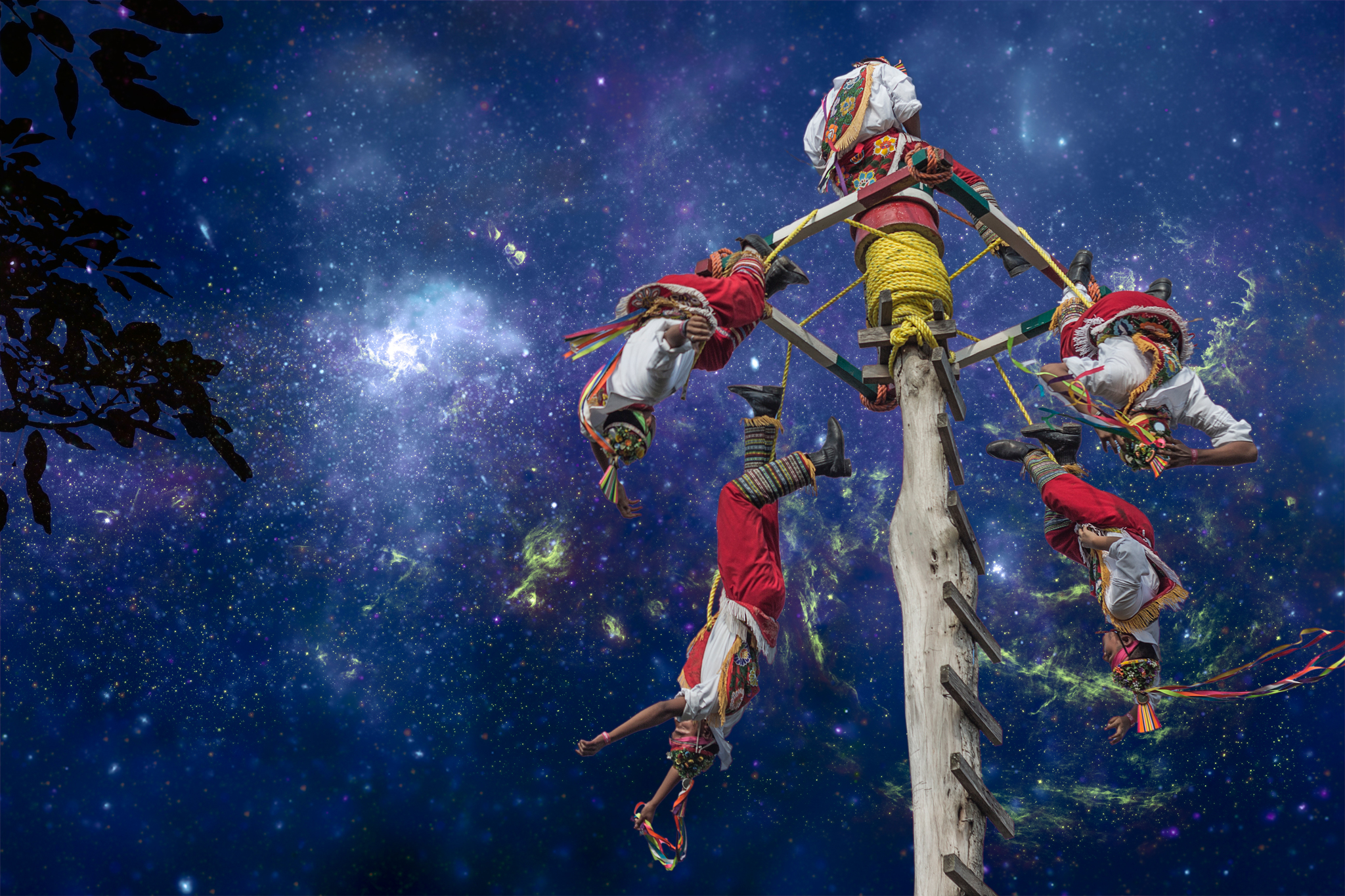 The CAI has created its own pedagogical program based on a very simple method: talking to and learning from the abuelos (grandparents), the custodians of Totonac Culture. Humberto grew up in El Tajín, moved to the city and got his university degree. “I know the academic model, the global model, people wanted to apply that same model here, but that’s not how things work. We won’t be colonised again.“ At CAI I learnt something that you cannot find online or on any textbook. The only way to acquire this knowledge is to go there, bring an offering (coffee, bread), and talk to the abuelos. It’s like when someone invites you to his or her home, as simple as that.

Totonac art and science revolve around a spiritual process. Each person has a star, a gift, and at CAI they encourage and nurture that star. There’s a sacredness that infuses every activity here. Potters ask for permission and forgiveness to Mother Nature every morning in a solemn ritual, since they’re literally removing a piece of clay from her, hoping to create something greater than just a pot or a cup. They talk to the clay before they even touch it. Their energy, their emotions, their whole soul goes into their art, be it dancing, cooking, or healing.

THE INTERCONNECTEDNESS OF ALL LIVING THINGS

A few days before leaving, Don Ramón invited me to his home to see him ‘at work’. He’s a local ‘rezandero’, someone who specialises in healing through prayers. Although I saw him praying many times at CAI during different rituals, he explains me that unlike other art forms at CAI, his can’t really be fully taught: “if someone wants to learn, I cannot give him or her everything, otherwise I would lose part of my gift.”

After a 30 minutes taxi ride through palm trees and endless corn plantations, we arrive at his village, where he and his wife live. In the garden they grow vegetables and the many herbs they use for the healing ceremonies. Chickens and their chicks run freely while a big turkey cools off in the shade. “She’s taking care of her eggs, they’re about to hatch,” Don Ramon explains to me. “We have everything we need here”. His wife fetches us some water and starts gathering some wood to start a fire. Cooking is a vital part of Totonac life, where only organic local produce is used and cooked on wood-fire stoves.

I walk into a small wooden shed next to the house, where I’m greeted by a pleasant dark and cool sensation. On one side of the room, Don Ramon’s altar is filled with candles, bottles, Catholic images and small statues: saints, virgins, apostles, martyrs, a baby Jesus… On the opposite side, portraits of his parents and his ‘spirit father’ Don Tirso share the wall. Don Ramon is getting ready, gathering several fresh herbs from the garden into one big beautiful bunch. He’ll use them in combination with holy water, aguardiente (a very strong local liquor) and other homemade lotions. In his hand, he carries a worn out book containing all the prayers he has collected during decades of work, handwritten by himself. During the ritual, Don Ramón will effortlessly switch from Totonac to Spanish. Beatriz stands in front of him, eyes closed. She’s getting a ‘limpia’ to cleanse her soul from bad spirits and jealousy, and to prepare her for the long journey back home to Cancún. 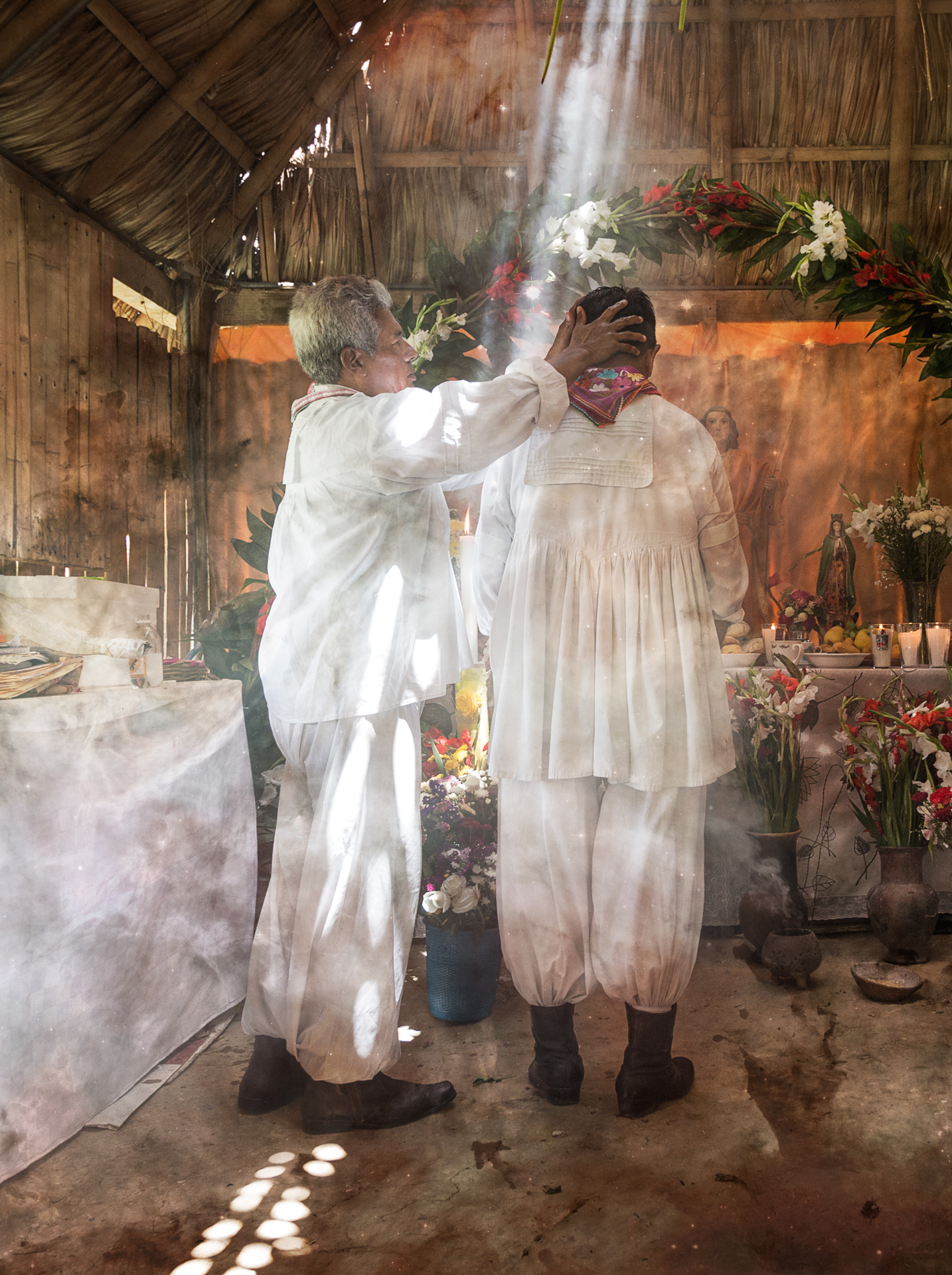 After a one hour ritual, the three of us sit down and talk. Beatriz explains how she feels while Don Ramon describes to me the different stages of the ritual. Next to us, the before lavishly green bunch of herbs is now withered, some specific herbs totally black. I ask Don Ramon about all the Catholic elements of his line of work, images and prayers that I’ve seen many times in Spain or Italy. I respectfully tell him that most Catholics would consider his work witchcraft or the devil’s work. He smiles: “But I’m not Catholic. I’m a believer.”

It’s 4am and while dancing in the rain, in front of the pyramids, asking the Totonac gods for their blessings and participating in a ritual I know pretty much nothing about, right there, I could feel the interconnectedness of all living things. I could understand that being an artist is a vehicle towards something bigger than myself; that the most basic human elements are very local and universal at the same time. 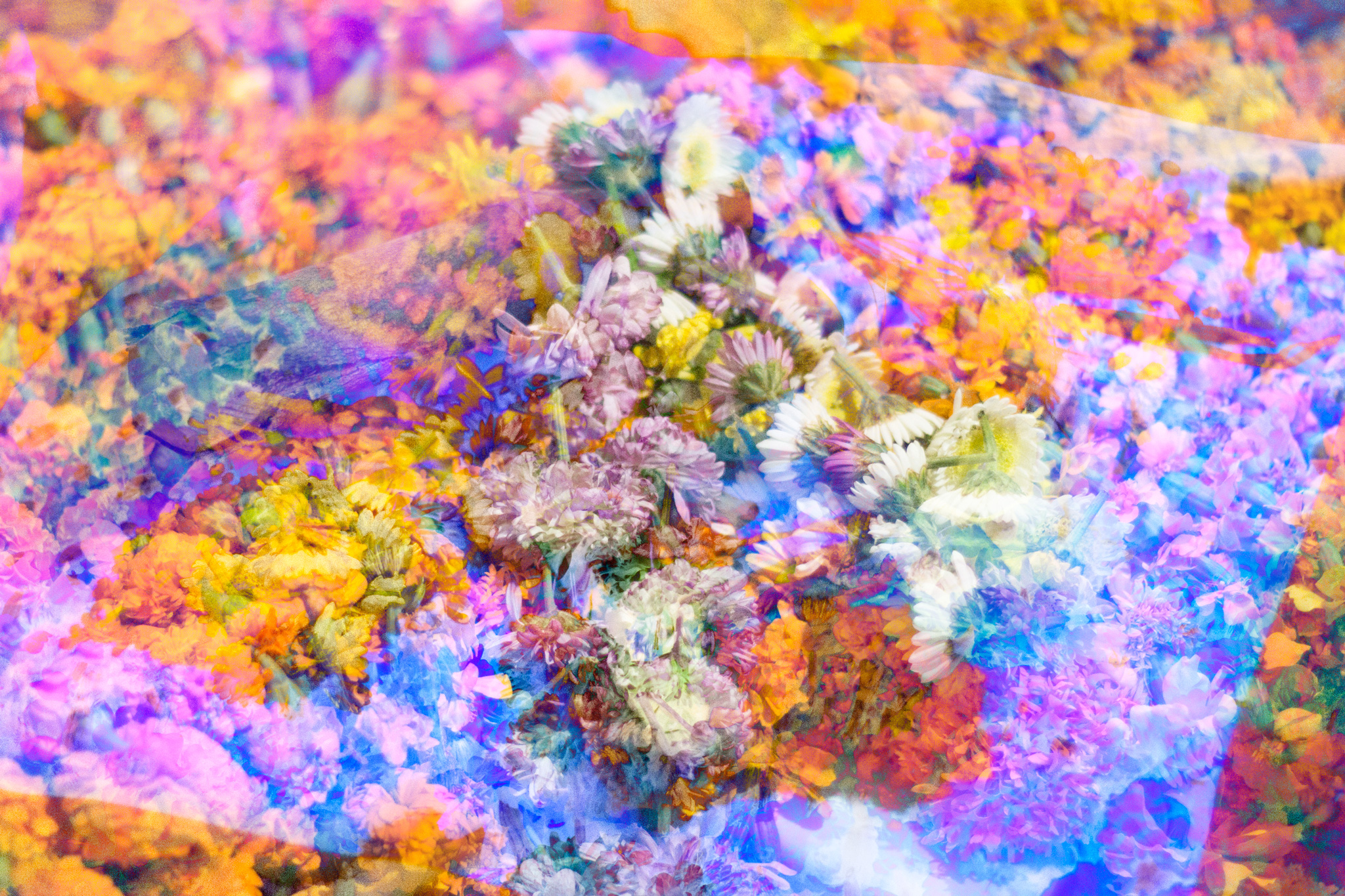 This project is supported by the Amsterdams Fonds voor de Kunst