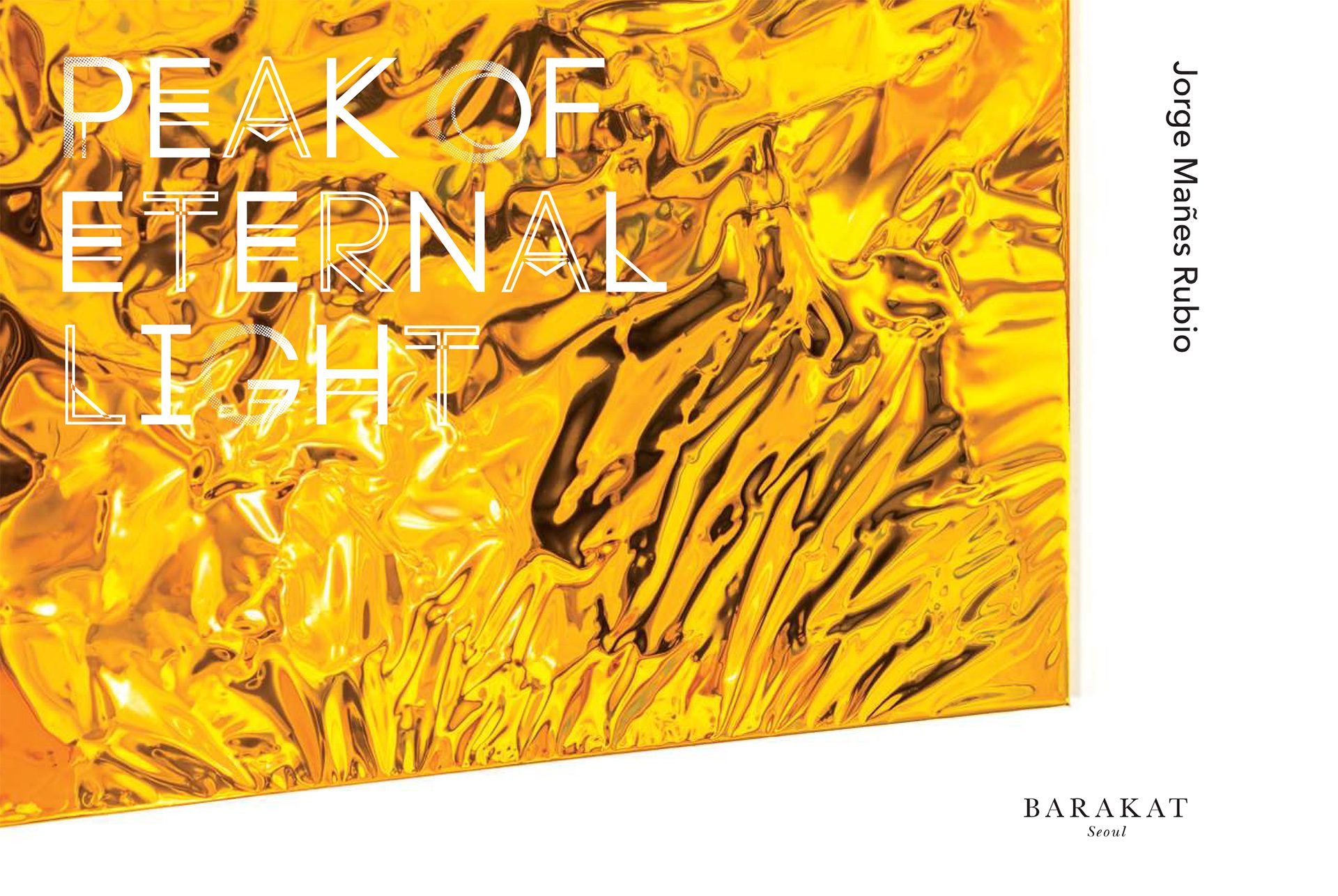 Barakat Seoul is holding Peak of Eternal Light, an exhibition of the work of Spanish artist Jorge Mañes Rubio (b. 1984), from Wednesday, May 2 to Sunday, June 3. As an artist, Jorge Mañes Rubio has investigated themes of vanishing civilization and shamanism from an ethnographic standpoint, focusing on forgotten places and stories that are given new meaning in his work. His experiments transcend the bounds of art to offer alternative perspectives on issues of politics, society, and the environment.

The works in Peak of Eternal Light, which is taking place as part of Barakat Seoul’s support program for young artists, focus on traces of forgotten ancient civilizations within modern society, repositioning and reconfiguring them on the alternative future stage represented by the Moon. In 2016, Mañes Rubio began an art residency program with the European Space Agency (ESA), envisioning a future civilization for human settlement of the moon. As seen in Peak of Eternal Light, the spaces he proposes combine technology with mythology, lunar exploration with ancient civilization. Starting from an imagined narrative involving the creation of a new civilization to colonize the Moon, the exhibition unfolds around the satellite’s south pole at Shackleton Crater, which is noted as receiving some of the moon’s greatest exposure to sunshine. With his attempt to build a new human civilization for lunar settlement, the artist realizes the utopian human dream of venturing beyond Earth into space’s endless expanse.

In pondering the question of what kind of culture the future lunar settlers will have, the author harks back ironically to the civilizations of the past – once splendid, but now subsumed into the faded pages of history. The artist’s perspective in finding the basis for cultivating a lunar civilization in ancient societies is both a process of anthropological exploration into the origins of human existence and an opportunity to underscore how unfathomably small humans are within the infinitude of space.

“We are proud that our 2018 Fellows comprise a truly global, cross-disciplinary group of individuals, each of whom has already had extraordinary impact in their fields. They are boldly using technology, the arts, science, advocacy and beyond to address some the most pressing topics of our day –including campus sexual assault, refugee health, a free and independent press, and climate change,” said TED Fellows Deputy Director Shoham Arad. “We believe deeply in the power of cross-cultural and cross-disciplinary collaboration to surface original solutions to seemingly intractable problems, and we look forward to seeing what this remarkable group is able to build as a result of joining the Fellows program.”

Check the link to find out more about the 2018 class of TED Fellows and Senior Fellows.

On Distant Objects And Hungry Gods

On October 3 I’ll be moving to S.Korea to work on my new project “On Distant Objects And Hungry Gods”. My new work will revolve around Korean shamanism (musok) and the female South Korean shamans (mansin, meaning ten thousand spirits, the potential number a good shaman is able to contact) who perform these rituals. Musok is considered an ancient and indigenous practice, dating back a few thousand years. Before Buddha, Confucius, Lao-tzu and Jesus, these women plied their trade in Korea, mediating between humans, objects, and supernatural entities. I see a decisive parallelism between Korean shamanism rituals and new mystical and ethnographical directions in contemporary art, and I believe there’s a synergy between the energy of the mansin and the energy of the universe.

This project is kindly supported by the National Museum of Modern and Contemporary Art, Korea and the Mondriaan Funds

Jorge Mañes was a speaker at TEDxUniviersidadEuropeaMadrid. Do not miss his talk where he speaks about how the Moon has inspired him to create new artworks and to look at the future of our civilisation with a more peaceful and embracing way.

The Museum and the Disposessed

Jorge Mañes Rubio and Amanda Pinatih, co-founders of Design Museum Dharavi, were among the speakers at Art for Tomorrow in Doha, a conference organised by the New York Times. New boundaries, where and why art follows the rules or challenges them, and art’s role in creating and influencing personal, corporate, urban and national identities were explored. In this session, “The Museum and the Disposessed”, Jorge and Amanda explain their work at the front of their museum and its impact on the challenging environment of Dharavi.

Design Museum Dharavi is the first museum of its kind, based in the homegrown neighbourhood of Dharavi, showcasing local talent through a nomadic exhibition space and employing design as a tool to promote social change and innovation on a global scale. The project was awarded the Leading Culture Destinations Awards 2016 in the category of ‘Best New Museum of the Year – Asia Pacific’ and was nominated for the Beazley Designs of the Year by the Design Museum London last year.

”A museum can be defined not only by architectural glamour or by a famous collection,” Mr. Rubio said. “We envision a museum where walls are dissolvable, a museum that will play a way more relevant social role in our cities. That’s the museum of the future.”

You can watch the full session here or read a recap of the conference on the NYT piece Culture as a Bridge Across Global Troubles.

Instead of seeing it as just a potential site for groundbreaking scientific discovery, sci-fi tourism or the lucrative exploitation of extraterrestrial natural resources, Rubio chose to look at the Moon as a universal and mythical idea. The Moon, unlike Earth, has no boundaries, no divisions, no nations. Do we have a right to change that? And so he decided the best way to symbolise this dilemma was to build a temple on the Moon. A temple to celebrate the Moon as a powerful symbol of unity for mankind.

Street Food Lighting at the National Museum of Modern and Contemporary Art, Seoul. Jorge Mañes Rubio is in Seoul to participate in ‘Activating the City: Urban Gastronomy’, a new exhibition at the MMCA, the National Museum of Modern and Contemporary Art. Rubio will be presenting his work ‘Street Food Lighting’ and kicking off the exhibition with an open discussion together with curator Bora Hong and chef Ara Ahn. ‘Activating the City: Urban Gastronomy’ includes the work of several artists, designers and activists such as Gordon Matta-Clark, Bonnie Ora Sherk and Jongbuhm Kim. The exhibition imagines design methodology as a device to form relationships among people in consideration of how we shall live, rather than producing new objects or work.

‘Activating the City: Urban Gastronomy’ opens today and will be running till 19 March 2017. Opening discussion will take place on Wednesday 7 December at 18:30. For more info visit MMCA. We’ve created a very special book that celebrates and documents our exhibitions, events and work so far! The publication includes a manual with the ‘lessons learnt’, a catalogue showing our first collection of chai cups and a series of essays from contributors such as urbz, Nadine Botha, Steven van den Haak and Dewi Pinatih. The book is entirely handmade, designed and printed by The Future Publishing & Printing, comes in a limited edition of a hundred copies and we still have a few copies left! The Beazley Designs of the Year is the Design Museum’s flagship exhibition and awards which celebrates design that promotes or delivers change, enables access, extends design practice or captures the spirit of the year. We are proud to announce that Design Museum Dharavi has been nominated in the category of Product and that we are part of the Beazley Designs of the Year exhibition in London.

Souvenirs that reimagine the world about us

Jorge Mañes Rubio was a speaker at TEDxMadrid.  Whether in a parking lot in a supermarket in London or in abandoned cities in China, Rubio’s work makes us travel and see things that are not what they seem to be. By researching exhaustively and reinterpreting , the artist suggests new values for familiar places. Through memories, pictures and interventions, Rubio re-creates his own story-telling. He mixes fictional elements with reality on purpose, and this unconventional approach becomes the vehicle for sending a social message about art and change.

This talk is in Spanish. For english subtitles click in the video settings.