Aerial view of the opening of Design Museum Dharavi

In February 2016 Design Museum Dharavi opened its doors in a 3sq km home-grown neighbourhood located in the heart of Mumbai. Around 1 million people live in Dharavi, and despite the tough conditions of their surroundings, they are capable of creating, designing, manufacturing and commercializing all kinds of goods. Design Museum Dharavi is a platform for these products and their makers, so they can be recognised by the local community, the city of Mumbai and the rest of the world. The main mission of Design Museum Dharavi is to employ design as a tool to promote social change and innovation, and to challenge the negative perception of informal settlements around the world.

Over the past decades, local makers, entrepreneurs and innovators have contributed to make Dharavi a story of success and self-improvement. This so-called slum (a word we must eradicate) has little to do with the kind of apocalyptic imagery sold to the world in blockbuster movies, best-selling books and tabloids. Despite its thriving community of talented workers who have long made Dharavi their home, this neighbourhood is still inexplicably perceived as an eyesore by many Mumbaikars as well as the rest of the world. The Design Museum Dharavi aims to establish new links between Dharavi and the rest of the city, promoting a greater exchange through a cultural program that features several workshops and exhibitions. Our mission is, through design, to focus on Dharavi’s potential and showcase it as what it really is: an exciting and promising creative community, full of potential and room for development.

Design Museum Dharavi engages with local makers in new collaborations, exploring their creativity and designing new items together for public exhibitions. The showcased objects, proposals, strategies and models reflect the talent of local makers, craftsmen, designers, contractors and other professionals operating within Dharavi, and aim to open new creative directions and scenarios. The goal of such collaborative process is portraying local identities and their communities in surprising and original ways, encouraging a new perception and understanding about this home-grown neighbourhood. These exhibitions showcase skills that go far beyond cheap or repetitive manual labour, an idea that unfortunately tends to be associated with local manufacturers. Design Museum Dharavi supports these makers and their practice throughout the whole process, creating the space and time necessary to experiment with new designs and proposals that go beyond their usual commissions. Every exhibition has a different theme depending on the collaborators, location, season, or subject chosen as inspiration.

Due to the high density of the population and the insecure tenure of its land, changes in Dharavi are constant. This user-generated neighbourhood is reinventing itself on a daily basis, which constitutes one of its many peculiarities. This fact inspired us to create a nomadic exhibition space that operates as an exhibition venue and meeting point for cultural exchange and innovation. The museum travels on a pushcart, similar to those used by locals to distribute and sell all kinds of goods and products.

A busy evening in Dharavi

The Design Museum Dharavi has been created as an experimental project to explore the impact that design may have in the perception and future development of areas such as Dharavi. We are excited to see how institutes, museums and similar cultural institutes will adopt a more socially relevant role in the future, where design methodologies are being applied in unforeseen scenarios. On a meta level, our idea is to create a model that in the future can be implemented in other similar settlements around the world. To start this discussion, a conference will be held in summer 2016 in Amsterdam, where the results so far of the Design Museum Dharavi will be exhibited, and experts from different disciplines will give their own view on this matter.

By 2030 some two billion people, or nearly a quarter of humanity, will be living in informal dwellings. With an ever-growing world’s population, home-grown neighbourhoods will play a major role in the expanding megacities of tomorrow. This first experience will serve us to measure the actual impact that our proposal had in Dharavi, and will start the conversation on how design could help us changing our perception towards these locations.

Design Museum Dharavi was awarded ‘Best New Museum of the Year Asia-Pacific’ at the Leading Cultural Destinations Awards 2016 in London, and nominated for the ‘Beazley Designs of the Year Awards’ at the new Design Museum London the same year.

Kumbharwada in Dharavi is an establishment of potters. It is around a hundred years old and forms the largest community of potters in Mumbai. The potters are originally from Saurashtra, Gujarat. Kumbhars means potter and wada colony, hence the name Kumbharwada – colony of potters. It occupies 9 hectare of land that houses around 1400 – 1500 families of which 700 – 800 still practice pottery today. Here is where we found potters Nathalal N. Chauhan and Mitul N. Chauhan, father and son, running a family business (employing over 10 people) that goes back for already four generations.

A woman drinks chai from a saucer

When you walk through Daravi you realise how much tea there is being consumed. Everyone has their own way to drink chai, from a small cup, a glass or even from a saucer. One thing that is sure is that when handing it over, it will spill. And getting that precious chai back into your cup seems to be a national sport in Dharavi. That’s where we saw a great design opportunity to work together with the Chauhan family and to come up with new products. Chai is part of India’s and definitely Dharavi’s identity and it only makes sense to start our exploration here.

Chai cups displayed at the museum

Chai cups displayed at the museum

The exhibition featured more than 50 small teacups, mugs and saucers together with four brand new water containers, all in different shapes and colours, reflecting Dharavi’s diversity and vibrant character. 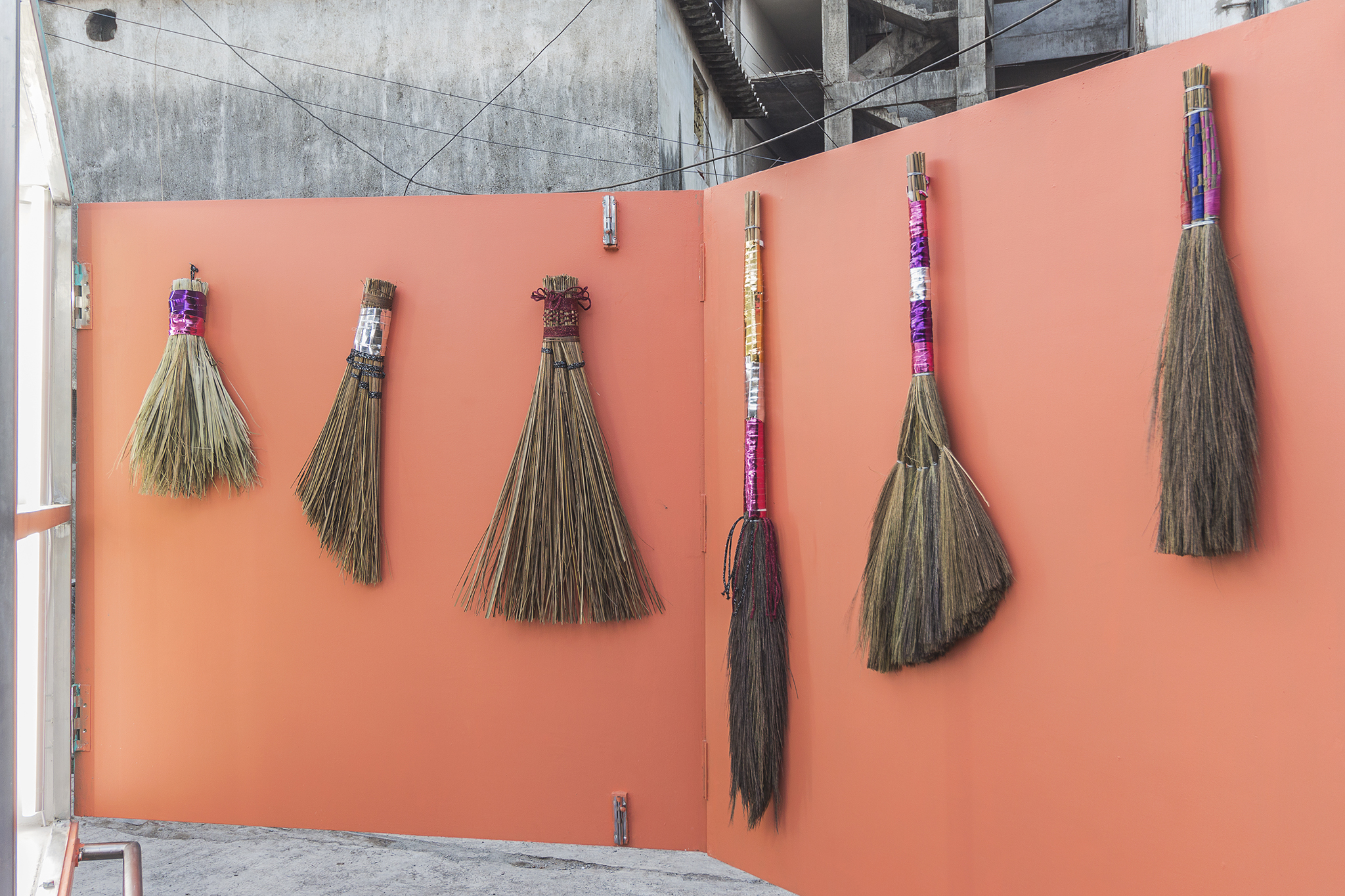 Some of the brooms displayed at the museum

A significant statement was displaying new brooms and hand fans next to these colourful ceramics. Broom makers are regarded as one of the lowest social groups in Dharavi, their work being not considered of much worth, leave alone being exhibited in a museum. Displaying these two completely different crafts together shows one of the museum’s main aspirations, featuring design objects regardless of their social status.

We spent a few days working with several broom makers in Dharavi, starting with making simple brooms out of different natural materials. From there different elements were added: two and three headed brooms, copper wires, colourful strings and fabrics. Together with the broom makers we explored new possibilities within these techniques, resulting in a beautifully crafted hand fan and a parasol.

Water filters exposed at the museum

Another object that got our attention were water containers, used in many houses in Dharavi to filter and store fresh water. We set ourselves the challenge of redesign them, since they always come in the same shape. We didn’t aim to look too far. When hanging out at the Chauhans shop, we were surprised by the way pieces were stored, specially those stacked on top of each other, since there’s not much space. We wondered if we could somehow keep stacking different pieces on top of each other, coming up with new shapes in between. That’s how these four water containers were created, using shapes already existing in the Chauhan’s workshop, but put together and decorated with bright plain colours. The reactions were interesting to say the least; people couldn’t really believe these were ‘made in Dharavi’. But again, the inspiration for this decoration came from within Dharavi’s own urban landscape. From outside these kind of neighbourhoods might seem grey and dusty, but once inside, every house, every corner, is decorated in bright colours, breaking free of the greyness of the city.

One of the many colourful streets in Dharavi

Amanda, Kruti and Jorge, members of the Design Museum Dharavi, working together with the Chauhans at their workshop

Opening of the Design Museum Dharavi

Media attending the opening of the Design Museum Dharavi

Nathalal N. Chauhan runs a pottery workshop at the museum

Cricket is big in India, and Dharavi is no exception. Every corner and every alley features improvised stumps, a bowler carefully thinking about his next move and a lucky batsman ready to show off his skills in front of the crowd. When the Cricket National Team wins a game, fireworks are being lit in their honour. That’s how big cricket is in Dharavi.

When we chose cricket as the main theme for Design Museum Dharavi’s second exhibition, we did so because we were inspired by how this game is being modified and reshaped in the streets of Dharavi. Anything close to a wooden or plastic stick will do as the perfect bat, balls differ in size, materials and colours, stumps are painted on walls, and rules are bent again and again to adapt the game to the size of the chosen location. What in a professional game would be a great drive, batting the ball out of the field’s bounds, in Dharavi it means quite the opposite. The batter is actually out because he lost the ball in between the rooftops, or even worse, endangered the neighbour’s life who was cooking with a window open. What ‘Street Cricket’ symbolises in Dharavi is the local’s flexibility and ability to change and reinvent themselves on a daily basis.

On a Saturday morning, after some delays and logistic issues, our tournament was ready to kickoff. It featured 4 different teams from 4 different communities from all over Dharavi. Every player from each team was sporting a unique cricket uniform, featuring the team colours on an intricate hand-embroidered motif, courtesy of the skilled embroiders of Dharavi. These white polo shirts were made by local manufacturers and tailors just a few days before the tournament. Players also used handcrafted cricket gloves, featuring different leather pads and designs, made by a local maker who adapted his safety gloves production to the game of cricket in a matter of days, and 27 hand-carved cricket bats of all kinds of different shapes and colours were available for them.

The results were unexpected, to say the least. While some of the bats broke after a few drives, players started to pick up their favourite bats, in what probably was the oddest and most diverse cricket game in Dharavi’s history. A trophy in the shape of three golden stumps awaited the winning team, while the Dharavi Design Museum displayed to the visitors how local makers, who are up to any kind of challenge, are also capable of creating the most amazing and fine-looking objects.

A local embroiderer crating the motifs for the cricket polo shirts

One of the four teams participating in the cricket tournament

The local crowd following the games

Some of the cricket bats used during the tournament

A local player ready to bat

The winners posing with their trophy

To celebrate the conclusion of the project, we published the book Design Museum Dharavi 2016, which is part of our idea to create a model that in the future can be implemented in other similar settlements around the world. The book documents our exhibitions, events and work so far. It includes a series of essays, a manual with the ‘lessons learnt’, and a small catalogue showing our collection of objects. The book is entirely handmade, comes in a limited edition of a hundred copies and is available via info@designmuseumdharavi.org

New York Times Art for Tomorrow 2017: The Museum and the Disposessed

With the support of